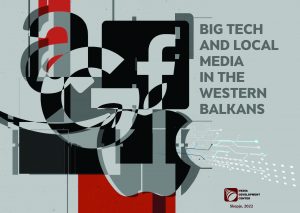 The new media system being created before our eyes is characterised by the dominance of content distributors. These distributors have replaced content creators as the dominant force dictating relationships in the media landscape, including the distribution of advertising dollars earned from the control of audience attention. Power has shifted online and into the hands, in particular, of so-called ‘Big Tech,’ the four or five dominant firms in the US information technology industry.

The disruption brought about by the “Big Tech” companies – Meta, Alphabet, Amazon, Apple and Microsoft – is evident primarily in their almost total domination of the advertising market. The audiences they command, the numbers of visitors on their main platforms, and the data on their users they collect, have blown out all competition. Traditional news media can’t compete.

The new situation has hit journalism hard, raising a number of existential questions. Unquestionably, we need responsible, accountable, objective journalism that holds power to account. The question is – how do we fund it? How do we ensure that we have professional journalists who are properly compensated for the public service they provide?

Local media have been hit especially hard. In the Western Balkans, local media have never been in particularly sound financial shape. They are expected to provide local reporting and inform their respective local communities as an essential prerequisite for a proper, functioning democracy. To continue to do that in a sustainable way, they must learn to live with the new reality of seemingly omnipotent tech companies and realise that, while they may be focused on local issues, they are, in essence, competing in a global marketplace.

The aim of this report is to provide an overview of the ways in which Big Tech firms (and numerous smaller analogues in the region and around the world) have affected the work and the survival of local media. It also aims to promote and inform the ongoing debate about changing media scene and the new digital environment, focused on the underlying issue of sustainability of quality journalism, including local reporting. To the extent that it is possible in such a rapidly changing arena, the report also seeks to identify what actions might need to be undertaken and makes a number of broad recommendations for the future.

The report was prepared with financial assistance from the “Media for All” Programme of the British Council, implemented in cooperation with BIRN, the Thomson Foundation and INTRAC.

The report is available, as PDF document, at the following link: