How to get quality local reporting in the digital era 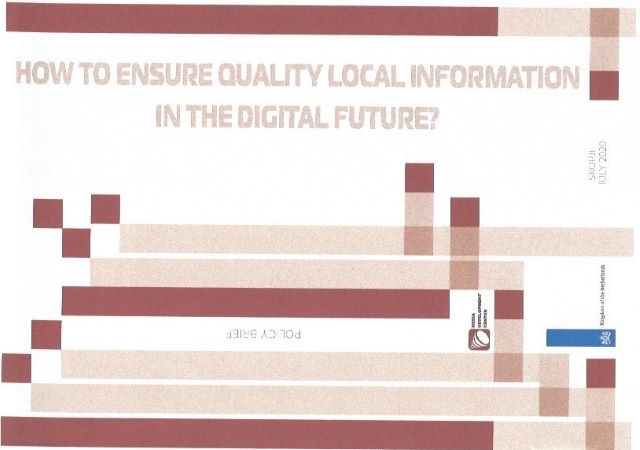 Local reporting, informing the citizens about latest events and developments in their local communities has always had a special place and carried special meaning in news reporting in general, as the most basic expression of democratic development of a society. As important as it may be for citizens to know how government performs at the national level, even more important is for them to know how local administrations work and how much they care that citizens get the services they paid for through their taxes.

The citizens need to know how local communal services function and operate, if thrash is taken out on time, in what condition are their streets and how local schools work. The citizens also want to know about local cultural life, the results of the local sports teams and, in a predominantly agricultural economy like North Macedonia’s, the weather forecast for the next day.

That information is rarely available on the big national media that focus on parliamentary politics and the work of the central government, and the cultural scene of the capital city. The local media, working and functioning inside the local communities are far more capable and suited to the task to serve those needs of their neighbours or, depending on the area of coverage, their municipality or a wider region.

The Republic of North Macedonia has a long history of local – or, more precisely, hyper-local – media. Thanks to high levels of decentralization in former SFRY, all municipalities operated municipal public radio stations, while a large majority had a local municipal newspaper (weekly, monthly, etc.).

That situation was carried over after the country gained independence in the early 1990s. The atmosphere of newly won freedoms, including the freedom of information, and the widely promoted new entrepreneurial spirit, resulted in a “boom” of new privately owned radio and television stations. The expansion was such that, at one point, there were more than 180 broadcasters functioning in the country, serving their local communities or, in the case of a handful of radio and television stations, the nation. Several local public radio stations also expanded into television, growing into local radio-television centres.

Most of the local newspapers also survived the change of political and economic systems. To the extent that their capacities allowed them, in view of the limited financial and human resources at their disposal, they managed to provide certain level of local reporting for their local communities.

We are aware of the general tone of pessimism that a realist’s view into the current situation of traditional media, burdened with problems of monetizing their production, especially the news coverage they provide. That will surely earn us undeserved characterization as doomsayers who “call for the disappearance of local media and media plurality in the country”. Sadly, regardless of our love and dedication to traditional media and their output, we cannot change or ignore the economic and other indicators that make this document rather disturbing reading.

This document, prepared under the auspices of the “Monitoring and Policies for Reformed Media Sector” Project, supported by the MATRA Programme of the Ministry of Foreign Affairs of the Kingdom of the Netherlands, aims to provide a brief overview of the existing situation and possible future trends and to promote and direct the discussion on possible solutions for this burning issue faced by the media scene globally.

The document is available for download on the following link:

How to secure quality local reporting in the digital future