Freedom of the Press 2015, the latest edition of an annual report published by Freedom House since 1980, lists all countries of the Western Balkans as “Partially Free” and expressed concerns over the worrying pattern of press freedom violations in the countries of the region in 2014. 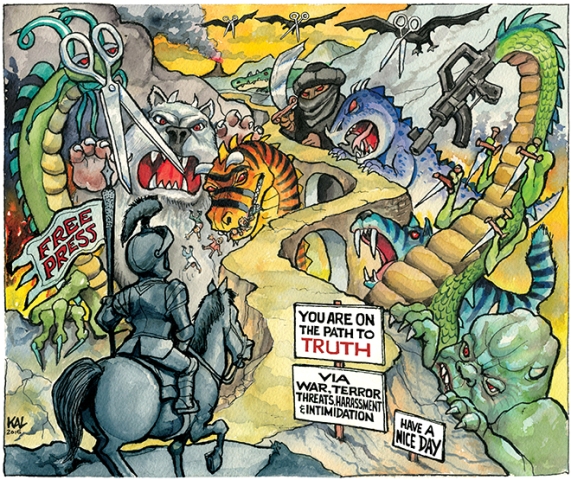 Front page illustration of the Freedom of the Press 2015 report

“These media environments feature several common problems: the use of defamation and insult laws by politicians and business people to suppress critical reporting; pro-government bias at public broadcasters; editorial pressure from political leaders and private owners that leads to self-censorship; harassment, threats, and attacks on journalists that go unpunished; and opaque ownership structures”, states the report.

Macedonia’s score has declined 10 points in the past five years, making it the worst performer in the region, ranked in the 125th place on the global list of 199 countries and territories. Several opposition-oriented outlets have been forced to close during this period, and journalist Tomislav Kezarovski remained in detention throughout 2014 on questionable charges that he revealed the identity of a protected witness in a murder case.

In Serbia during the year, the administration of Prime Minister Aleksandar Vučić sought to curb reporting on floods that hit the country in May and directed increasingly hostile rhetoric and harassment at independent journalists; such pressure allegedly motivated broadcasters to cancel major political talk shows.

Conditions in Montenegro have deteriorated since Milo Đukanović returned to the premiership in 2012, with independent outlets such as Vjesti, Dan, and the Monitor suffering lawsuits, unprosecuted physical attacks, and hostile government rhetoric.

Conditions for the media deteriorated sharply in 2014, as journalists around the world faced mounting restrictions on the free flow of news and information—including grave threats to their own lives.

Governments employed tactics including arrests and censorship to silence criticism. Terrorists and other non-state forces kidnapped and murdered journalists attempting to cover armed conflicts and organized crime. The wealthy owners who dominate private media in a growing number of countries shaped news coverage to support the government, a political party, or their own interests. And democratic states struggled to cope with an onslaught of propaganda from authoritarian regimes and militant groups.

Freedom of the Press 2015 report found that global press freedom declined in 2014 to its lowest point in more than 10 years. The rate of decline also accelerated drastically, with the global average score suffering its largest one-year drop in a decade.

The share of the world’s population that enjoys a Free press stood at 14 percent, meaning only one in seven people live in countries where coverage of political news is robust, the safety of journalists is guaranteed, state intrusion in media affairs is minimal, and the press is not subject to onerous legal or economic pressures.

The steepest declines worldwide relate to two factors: the passage and use of restrictive laws against the press—often on national security grounds—and the ability of local and foreign journalists to physically access and report freely from a given country, including protest sites and conflict areas.

“Paradoxically, in a time of seemingly unlimited access to information and new methods of content delivery, more and more areas of the world are becoming virtually inaccessible to journalists”, states the report.

After a multiyear decline in the global average score that was interrupted by an improvement in 2011, there was a further decline of 0.74 points for 2014, bringing the figure to its lowest level since 1999 and marking the greatest year-on-year decline since 2005. All regions except sub-Saharan Africa, whose average score improved slightly, experienced declines of varying degrees, with the Middle East and North Africa showing the largest net decline.

In terms of thematic categories, the drop in the global average score was driven primarily by decline in the legal score, followed by the political score; the economic score showed the smallest amount of slippage.

Read the full Freedom of the Press 2015 report at the following link: FreedomofthePress_2015_FINAL