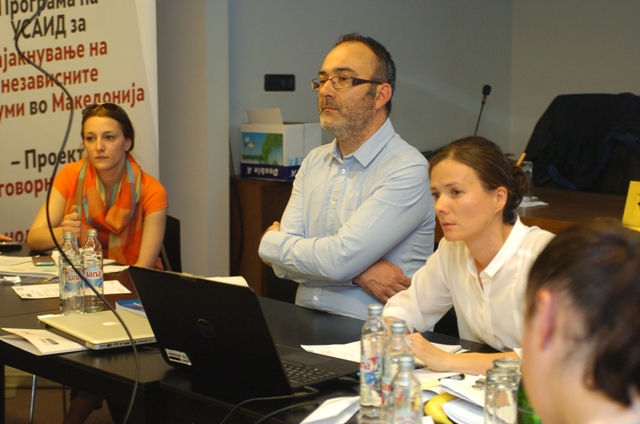 Boyko Boev at a training

In 2011 Thomas Bingham, at the time the most senior judge in England and Wales, published The Rule of Law, which has become one of the most important law texts in the world today. The book defines the eight core principles of the contemporary concept of the rule of law. At present the rule of law, together with democracy and human rights, are the three assessment criteria for the progress of Macedonia toward accession to EU membership.

While reading the media legislation of Macedonia, I recalled Lord Chief Justice Bingham’s eight principles that are integral to the rule of law. The job for media lawyers like me is to determine to what extent the legal framework of the media is appropriate for its operation and, most importantly, that the media are able to operate without censorship and unnecessary or disproportionate restrictions. For media laws to adequately serve journalists, media and the general public, they should align with the principles of the rule of law. The following analogy illustrates the relationship between media law and the rule of law:

The media laws relate to the rule of law like ships to the river of Vardar.

While ships may have navigation systems, these systems will be inadequate in the river if the water is insufficient or the river bed is too rocky. Like the ships, no matter how great the aims of media statutes are, they will not be achieved if the statutes fail to comply with the principles inherent to the rule of law.

1. “The law must be accessible and so far as possible intelligible, clear and predictable.”

2. “Questions of legal right and liability should ordinarily be resolved by application of the law and not the exercise of discretion”

“The law must be accessible and so far as possible intelligible, clear and predictable.”

In the context of media legislation, this principle means that the mere existence of a written piece of legislation is not enough to protect media freedom. Additionally, the legislation must meet certain standards of clarity and precision to enable journalists, media and citizens to foresee the consequences of their conduct. Vaguely worded rules without a clear scope lead to self-censorship and the abuse of powers.

Here are two examples of unclear provisions of the Law on the Media of Macedonia:

First, the law does not set out clear assessment criteria regarding the legality of limitations on media freedom. It states that limitations should be in accordance with the Constitution and bans the transmission of media content that threatens national safety, calls for violent destruction of the constitutional order of the Republic of Macedonia, or calls for military aggression or armed conflict, incites or spreads discrimination, intolerance or hatred based on race, sex, religion or nationality.

The limitations for the protection of national safety, calls for violent destruction of the constitutional order and calls for military aggression, incitement and spread of discrimination, intolerance or hatred seem reasonable but the law does not define these terms. What is “national safety”? What amounts to “incitement” or “spread of discrimination” or “spread of hatred”? What does it mean to “call for violent destruction of constitutional order”?

By way of example, Article 10 of the European Convention of Human Rights (ECHR) sets out the criteria for the legality on restrictions of the right to freedom of expression. It requires that all limitations are:

2.    Pursue one of the legitimate interests set out in the ECHR, such as protection of national security, public order, morals, and reputation or rights of others; and

3.    be necessary and proportionate for the protection of the legitimate interest.

The European Court of Human Rights has avowed that states should adopt clear and precise legislation when providing for limitations on the right to freedom of expression. The Macedonian legislator failed to guarantee the right because the restrictions set out in Macedonia’s Media Law are not clear. Furthermore, the law does not require that all restrictions on the right to freedom of expression must be necessary and proportionate in line with Article 10 of the ECHR.

Another example of an unclear provision in the Macedonia Media Law is the rule that journalists’ right to maintain the confidentiality of their sources of information might be overcome “in accordance with the international law and the Constitution”. Few lawyers – and even fewer journalists – know what international law provides in terms of protection of journalistic sources. Moreover, different jurisdictions around the world diverge in terms of the standards they prescribe for protecting journalists’ sources.

This principle comprised within the rule of law stems from the need to secure protection against the arbitrary use of powers. Let me give you one example. It would be unfair, and against the rule of law, if judges in the town of Strumitsa and the judges in Skopje use different standards when deciding cases of violations of the Media Law. Or if the criteria applied by judges in libel cases depended on whether the claimant is a politician or an ordinary citizen. To avoid this risk, the legislator should set out assessment criteria in all cases involving legal rights such as the protection of journalistic sources or the right of reply.

The Media Law fails to meet the rule of law principle that legal rights and liability should be resolved by the application of the law rather than on the exercise of discretion. For example, the law states the amount of fines to be awarded for violations of the law but does not provide the criteria for determining the fines. It therefore grants unlimited discretion for judges to resolve the issue. Consequently the judges in Strumica may apply different criteria from the judges in Skopje when determining harm caused by publications. Similarly, a case initiated by a politician may be examined differently from a case initiated by an ordinary person.

This principle of the rule of law requires that the legislator, courts and all governmental bodies or self-regulatory bodies such as press regulators consider how the regulation and their decisions affect the human rights involved. In the field of media law this principle relates primarily to the protection of the right to freedom of expression.

Although the Media Law incudes statements pronouncing media freedom it does not afford adequate protection of the right to freedom of expression for four reasons.

The first two reasons are the lack of clarity of the law and the broad discretion given to those applying the law, as explained above.

Media laws in other countries are adopted primarily for the protection of media freedom and therefore require public bodies and judges to ensure this protection. A good example is Article 4 of Sweden’s The Freedom of the Press Act, which states:

Any person entrusted with passing judgment on abuses of the freedom of the press or otherwise overseeing compliance with this Act should bear constantly in mind in this connection that the freedom of the press is fundamental to a free society, direct his or her attention always more to illegality of subject matter and thought than to illegality of expression, to the aim rather than the manner of presentation, and, in case of doubt, acquit rather than convict.

Finally, statutes should enhance the protection of the right to freedom of expression and media freedom by providing safeguards for fairness of accreditation of journalists and protections against searches and seizures of journalistic materials and wiretapping of journalists. The statutes should prescribe measures to prevent and investigate violence against journalists and punish persons found guilty of such acts. To protect the right to freedom of expression and media freedom, the media legislation should also provide a variety of non-pecuniary remedies in cases of violations and out-of-court procedures to resolve disputes. Although there are some positive examples of non-pecuniary remedies in Macedonia legislation, it is recommended the law should ensure an increased recourse to non-pecuniary remedies and their impact in cases involving journalists and media.

What needs to be done?

Due to its shortfalls, the Macedonian media legislation is unlikely to improve the situation for journalists, the media and the people because it does not comply with three of Bingham’s rule of law principles. It is time for politicians, lawyers, journalists, media and NGO activists to focus their attention on the quality of the laws rather than on their quantity. The quality of the laws can be improved if they are prepared by lawyers with expertise in different areas, namely media regulation, legislative drafting and, of course, the rule of law.

This document was developed by the Organizational Performance Improvement Program, which is supported by the American people through the United States Agency for International development (USAID).

The contents are responsibility of the Organizational Performance Improvement Program, implemented by DETRA Centar, and do not necessarily reflect the views of USAID or the United States Government.