Defamation – A Noose for the Freedom of Expression 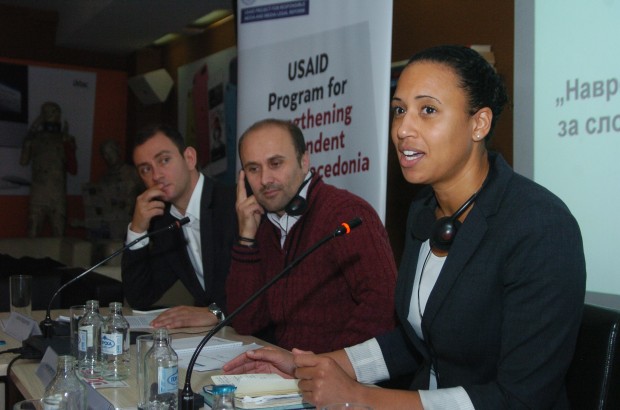 Under the auspices of the USAID Project for Media Legal Reform and Responsible Media, the Media Development Center organized, on November 7, 2014, a public debate on the topic “Defamation – A Noose for the Freedom of Expression?”.

The debate was moderated by journalist Saše Dimovski, while Nani Jansen, the Legal Director of the London-based Media Legal Defense Initiative (MLDI); Filip Medarski, attorney-at-law; Jadranka Kostova, editor-in-chief of “Fokus” weekly; Branko Gerovski, editor-in-chief of “Sloboden pečat” daily; Aco Kabranov, editor at the Libertas.mk news website; Siniša Stanković, journalist; and Naser Selmani, President of the Association of Journalists of Macedonia (AJM); were the featured panelists.  The debate gathered many journalists, media and human rights experts, and representatives of international institutions who joined the discussion. The main talking points for the discussion were based on the findings of the 3rd Quarterly Report from the Monitoring of Defamation Action Cases Tried in Macedonian Courts, prepared by the Media Development Centre and covering the period June 15 – October 15, 2014.

It was emphasized at the debate that the European Court of Human Rights considers the freedom of expression to be a key human right and that it is one of the foundations of the democratic society.  In that sense, it is important to understand that the protection is not reserved only to “good and positive speech”, but that the protections apply also to rough speech, to moderate exaggeration, even provocations. In other words, the Strasbourg Court constantly reaffirms the position that, from the point of view of freedom of expression, it is of utmost important to protect the critical speech that promotes and stimulates public debate.

Furthermore, holders of public offices need to have a higher threshold of tolerance than the ordinary citizens. In defamation action cases, the sanctions need to be proportionate to the actual situation in the media, having in mind that high awarded damages could lead to self-censorship, have “chilling effect” on investigative journalism, even force some media to close completely.

The participants in the discussion noted that the Law on Civil Liability for Defamation didn’t achieve the aims for which it was adopted – the decriminalization was supposed to reduce the pressure on the journalists, the levels of incidence of defamation in society wasn’t reduced, and journalism became the most persecuted profession in the state. For that reason, most panelists believe that it needs to be changed and amended, and especially to ensure much lower allowed damages.

As far as the Macedonian case law is concerned, the participants in the debate noted that the Law was applied in a selective manner and that some litigants, especially government officials and politicians from the ruling parties are treated as “being more equal than others”. The judiciary, according to the participants in the debate, currently primarily serves as a protective belt for the high-ranking government officials.  The decision in the Mijalkov vs. Fokus indicates that the Court is inclined to provide greater protection to the honour and reputation of officials than to the freedom of expression. In that case, the Court didn’t recognize the public interest and its implementation of the ECHR Case Law is inconsistent.

Another issued noted in the debate was the “Draconian” sanctioning policy which is completely absurd and totally out of synch with the economic status of the media and journalists in Macedonia. In fact, it has only one goal – to destroy journalists and media that don’t play along with the Government.