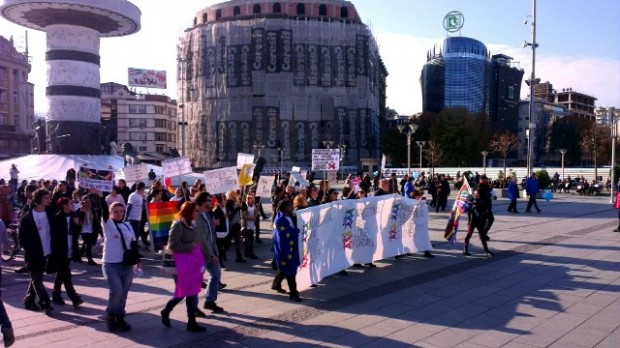 The 5th Tolerance March, under the motto “There is Love for All in Macedonia – the Violence Doesn’t Start and Won’t End with Me!”, dedicated to the right to life free of violence, was held last Saturday, November 16, 2013, on the International Day of Tolerance.

In their brief presentations in front of the Government of the Republic of Macedonia, the representatives of the organizations that joined the March presented the challenges of violent behavior they face every day, sharing the same message – NO to violence, NO to the silence of institutions, NO to impunity for the perpetrators.

The participants of the March, organized by the Helsinki Committee of Human Rights in Macedonia and the LGBTI Support Centre, with support from 14 other NGOs, walked from the Government building, through downtown Skopje, to the plateau in front of “Most” General Store (now a branch of the University of Southeast Europe) and together said NO to the violence that is quickly turning into a fact of everyday life in our society.

The March was concluded with cultural and artistic performances, poetry reading and music. Later that day, the International Day of Tolerance was also marked with screening of short films and a debate at the GEM Club in Skopje’s Old Bazaar.

The Helsinki Committee and the LGBTI Support Centre praised the professional conduct and the good cooperation with the Skopje Police Department. The March proceeded peacefully, without any incidents.

The activists of the Youth Education Forum (YEF) noted, in their presentation at the March, the last violent incident that took place day earlier, on November 15, 2013, when masked assailants attacked and injured eight high school students, boys and girls, in a public bus.

YEF expressed serious concern over the trend of growing violence among the young people in the capital of Skopje. According to the latest survey conducted by the organization, the youth in Skopje don’t feel safe and live in fear of violence.

“According to our survey, 52.3% of high school students feel safe in a public bus only occasionally, 19% never feel safe on a bus ride, while 49.3% of them believe it is easy or relatively easy to purchase a gun in Skopje”, noted the representatives of the Youth Education Forum.