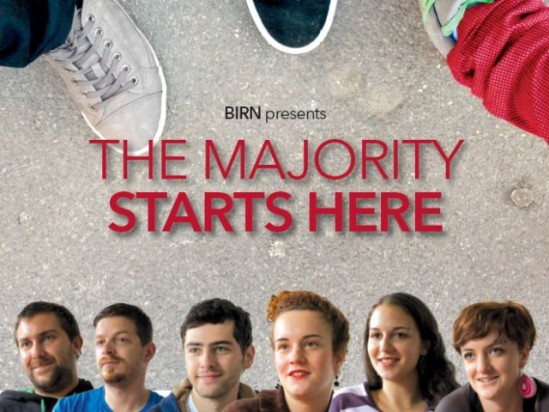 The documentary film Majority Starts Here, a story of six young men and women from former Yugoslavia – Macedonia, Croatia, Bosnia and Herzegovina, Montenegro, Serbia and Kosovo (without Slovenia) who travel through the region in an attempt to find out how much they know about recent troubled past, had its premiere last night, September 25, 2013, at the Cinematheque of Macedonia in Skopje.

The six young people, travelling through former Yugoslavia, face ethnic tensions and prejudice, to discover all the ways in which past conflicts influence their lives. At the same time, they attempt to find ways to overcome the prejudice and tensions in order to secure better future for themselves and the region.

Ana Petruševa from the Balkan Investigative Reporting Network (BIRN) announced that the footage shot during filming was used to produce a five part TV series (the film itself is 57 minutes long), which will be broadcast on TV stations in all the countries in the region. In Macedonia, the series will be broadcast by 24Vesti TV, starting today, September 26, 2013.

The Majority Starts Here will have its Belgrade and Sarajevo premieres this evening, and will then move to Prishtina/Priština on October 2, to Zagreb on October 3, and to Novi Sad on October 7.

The Majority Starts Here was directed by Belgian director Lode Desmet and was produced by the Balkan Investigative Reporting Network, under the auspices of the Balkan Transitional Justice Project which aims to improve public understanding of transitional justice issues in BiH, Croatia, Serbia, Montenegro, Macedonia and Kosovo.