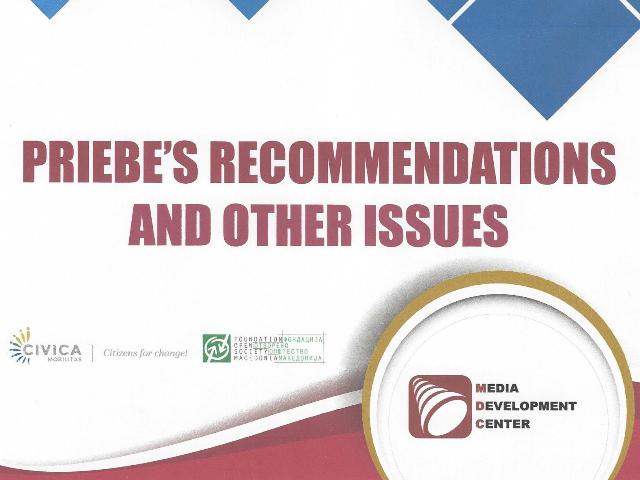 The agreement between the four leading political parties of July 2016 (finalized on August 31, 2016) stipulates that Macedonia should soon enter a period of urgent changes of media legislation. The four parties’ leaders agreed that, in the first six months after the elections, they shall prepare changes to the media legislation to implement and integrate the “Urgent Reform Priorities” and the “Recommendations of the Senior Experts’ Group on systemic Rule of Law issues relating to the communications interception revealed in Spring 2015”, the so-called “Priebe Report”.

The “Priebe Report” precisely locates the problems of Macedonian media sector, that is, the influence of politics over media and newsrooms that takes the form of primarily economic and judicial pressure, and the insufficient independence and transparency of regulatory bodies and the public broadcasting service.

The recommendations have several aims and goals. The first aim is the increase the resistance of media to external pressure – economic, political and judicial – and to eliminate all instruments and opportunities to holders of political and economic power to pressure the media. The second goal is to strengthen the public broadcasting service, in terms of its editorial and financial independence, allowing it to take its place as the central pillar of the national broadcasting system, especially in the area of information. Finally, one general goal is to allow the media and journalists to engage in comprehensive, objective reporting of social events, trends, developments and situations and to perform their role of independent watchdog over spending of public funds and performance of public administration and government.

The full text of the document is available in PDF format on the link below.