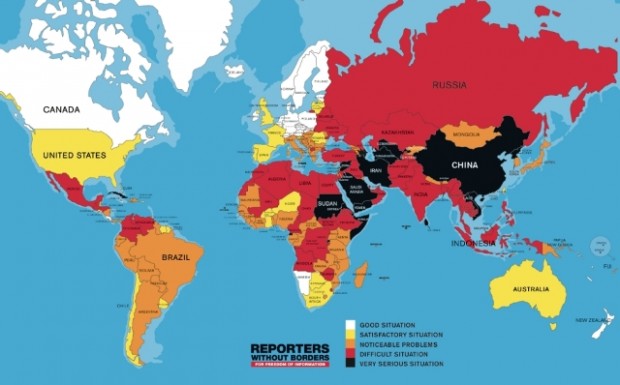 Macedonia remains the worst ranked of all countries of Europe and Western Balkans in the World Press Freedom Index 2015, the annual report prepared by Reporters Without Borders, in spite of the fact that it advanced seven places compared to its 2014 ranking. In the latest report, published earlier this week, Macedonia is ranked 117th out of 180 countries covered by the survey, compared to the 123rd place it held in the PFI 2014.

“The situation of Macedonia’s media continued to be bad in 2014, a year marked by the misuse of defamation legislation and politically-motivated allocation of state advertising”, states the Press Freedom Index 2015.

The report lists the case of journalist Tomislav Kezarovski, who was sentenced to four and a half years in prison for allegedly revealing the identity of a protected witness and had his sentenced reduced by the Court of Appeals to two year term in prison.

The fact is that, in spite of the rise of its ranking, Macedonia’s score of 36.26 was 0.17 index points worse than the 2014 score. Such a score, the report notes, is due to the problems faced by reporters, for example, the cases of June 2014 when police officers forced reporters covering public protests to erase and delete the photographs and video footage taken at the protests.

Albania is ranked in 82nd place (rise of three places), Kosovo is 87th (fall of seven places), and Montenegro kept the same ranking as in 2014, in 114th place.

The 2015 World Press Freedom Index highlights the worldwide deterioration in freedom of information in 2014, with media freedom in retreat on all five continents, due to wars, growing threat from non-state operatives, violence during demonstrations and economic crisis. According to PFI2015, two-thirds of the 180 countries surveyed for the 2015 World Press Freedom Index performed less well than in the previous year.

The PFI 2015 makes special note of the decline of media freedom in the European Union member-states, in spite of the fact that Europe and Western Balkans are the region that leads among all regions by a wide margin. It states that the decline exposes the limits of its “democratic model” and highlights the inability of its mechanisms to halt the erosion. (For more details about the situation in Europe, read the analysis “European Model’s Erosion”).

“The EU appears to be swamped by a certain desire on the part of some member states to compromise on freedom of information. As a result, the gaps between members are widening – EU countries are ranked from 1st (Finland) to 106th (Bulgaria) in the Index, an unprecedented spread”, states the PFI2015.

The global rankings are led, again, by three Scandinavian countries: Finland, Norway and Denmark. At the other end of the scale, Turkmenistan, North Korea and Eritrea, in last place, were the worst performers.