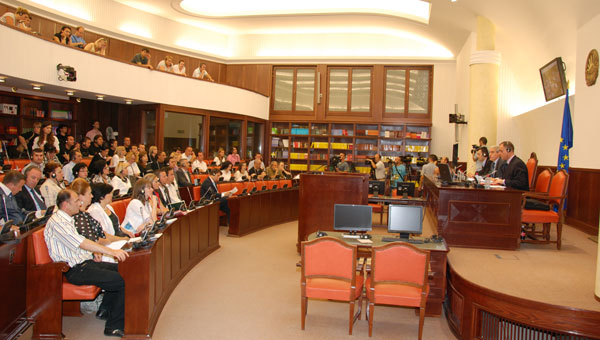 Photo Parliament of the Republic of Macedonia

The Media Development Centre took part in the public debates on the Draft-Law on Audio and Audiovisual Media Service and the Draft-Law on Media, organized by the Parliamentary Committee on Transport, Communications and Ecology on July 29 and July 30, respectively.

The Committee invited representatives of the media, jounalistic and media associations, trade unions, civic and non-governmental organisations working in the areas of media freedoms and protection of human and civil rights in the Republic of Macedonia.

Representatives of the offices of international organisations and institutions in Macedonia, and members of the diplomatic corps stationed in the country also participated in the debate.

In the debate on the draft-Law on audio and audiovisual media services, the Media Development Centre focused on the great and extraordinary competences and authority the bill awards the proposed regulatory body, the Agency of Audio and Audiovisual Media Services, and especially to its director.

Our remarks and objections also referred to the lack of transparency in the work and operations of the regulatory body (which will replace the existing Broadcasting Council), knowing that the provisions on „transparency“ and „accountability“ don’t guarantee the actual transparency and accountability of the Agency.

Regarding the Draft-Law on Media, MDC repeated the position that the law is not necessary and that the Government needs to retract it from adoption procedure. Regarding specific procedures, we expressed our disagreement with several definitions in the law which we find to be imprecise, restrictive and discriminatory.

That is especially the case with the offered definition for „journalist“, which ties the journalistic profession only to the work and engament in traditionally structured and set up „legacy“ media and disregards the latest developments of technology, in particular on the internet, which allow for significant extension of the category of persons that work on gathering, reporting and interpretation of information for the public, understood in the wider or narrower sense of the word.

The addresses of MDC representatives in the two debates are attached to this article (currently available only in Macedonian).