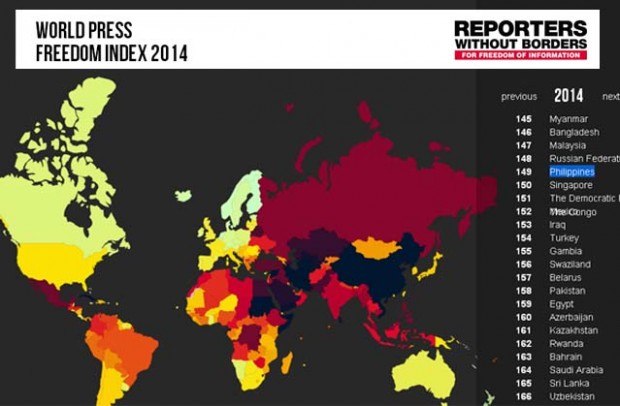 The 2014 World Press Freedom Index, released by Reporters Without Borders last Wednesday, on February 12, 2014, singled out Macedonia and Montenegro as the two countries in which press freedoms and freedom of expression continued to suffer serious setbacks in 2013.

The 2014 Index notes that “although the country has been tackling reforms designed to put it on the road to EU membership, the democratic window-dressing of the past few years is not enough to hide the many freedom of information violations”. It makes special mention of journalist Tomislav Kezarovski as a symbol of those violations. Kežarovski was sentenced to four and a half years in prison in October 2013 for revealing the name of a protected witness in a murder case, and his jail term was changed to house arrest only after considerable international pressure.

The 2014 Index notes that safety of journalists continues to be a major concern in Montenegro (ranked 114th, a drop of one place compared to 2013 ranking of 113th), a country with tradition of investigative journalism that is more developed than in some of its neighbours. The report notes the bomb planted in front of the home of Tufik Softić, investigative reporter who writes for Vijesti daily and Monitor weekly magazine, and adds that the response from the authorities to this violence has been minimal.

“Almost all cases have gone unpunished, including the 2004 murder of Dan editor Dusko Jovanovic, who was gunned down on the street. The person behind it has never been identified and brought to justice”, states the 2014 World Press Freedom Index.

The report also notes the case of Milka Tadić-Mijović, editor at Monitor weekly, who was targeted by obscene sexist vilification after she published an op-ed piece headlined “Dancing with the dictator”. The report points out that, although a report was filed with the police, which was given the phone number from which one such SMS was sent, no action was taken against those responsible.

The report adds that Montenegro politicians have mastered the language of the EU’s institutions and put on show of striving to be more democratic for the benefit of an international community more concerned about regional stability than actual progress in respect for civil liberties.

The World Press Freedom Index also notes concerns for the situation in Croatia (ranked 65th, drop of one place compared to 2013 Index), which was included in the section on the European Union for the first time. While it recognizes significant changes that result from the process of negotiations with the European Commission, it notes the lack of independence of national public broadcaster HRT after reforms carried out under centre-left Prime Minister Zoran Milanović. The report notes that the decision for the head of HRT, the members of its supervisory board and its administrators to be appointed by parliament gives the ruling party political control over broadcast content.

Albania is ranked 85th and recorded and improvement of 17 places over the previous year, by far the most significant improvement in the region. The report notes that ambitious programme of the Socialist Party of Albania which won clean elections in 2013, a plan that includes draft new legislation that improves media ownership transparency, reinforced independence for the public broadcaster and guaranteed media access to information held by state entities.

As far as the other countries in the region are concerned, Serbia is ranked 54th, an improvement of nine places; Bosnia and Heryegovina is ranked 66th, improvement of two positions, and Kosovo gained five places over last year’s report and is now ranked 80th in the world.

The 2014 Reporters Without Borders World Press Freedom Index spotlights major declines in media freedom in such varied countries as the United States, Central African Republic and Guatemala and, on the other hand, marked improvements in Ecuador, Bolivia and South Africa.

“The report makes governments face their responsibilities by providing civil society with an objective measure, and provides international bodies with a good governance indicator to guide their decisions”, said Reporters Without Borders secretary-general Christophe Deloire.

The Reporters Without Borders head of research Lucie Morillon noted that the ranking of some countries, including democracies, has been impacted by an overly broad and abusive interpretation of the concept of national security protection. She added that the index reflects the negative impact of armed conflicts on freedom of information and its actors, noting that the “world’s most dangerous country for journalists, Syria, is ranked 177th out of 180 countries.”

This year’s index covers 180 countries, one more than the 179 countries covered in last year’s index. The newcomer is Belize, which has been ranked in the enviable position of 29th.