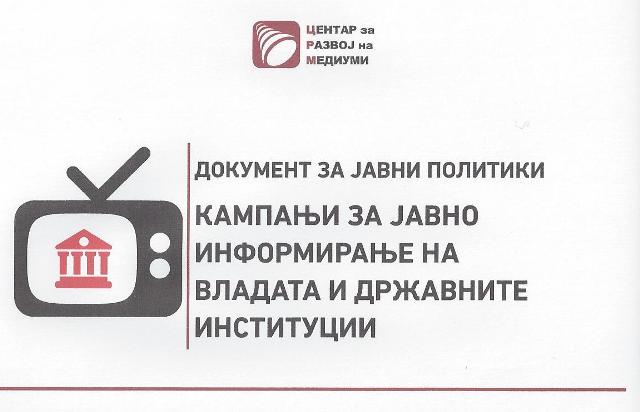 Over a period of several years, the Government was among the leading, or in fact the leading buyer of advertising time and space in Macedonian media. At the start of July 2015, the Government of Macedonia introduced a moratorium on all commercial adver¬tising and media buying for its information campaigns.

Government’s advertising campaign financed with public money was the best “legal” way to “corrupt” the media, with the goal to establish direct influence on the editorial policies of the media. At the same time, for many of those campaigns, financed with public funds, it is difficult to say that they refer to any sort of public interest and. Rather, they constitute promotion campaigns for the ideological values and positions of the leading party in the ruling coalition.

This policy paper aims to contribute to the efforts to restructure and reform Macedo¬nian media system, in line with the ongoing negotiations on the urgent systemic re¬forms that arise from the “Pržino Agreements” of June and July 2015, but also to the ongoing efforts to create and establish an open, democratic and pluralist media system in Macedonia.

The document, in PDF format, is attached to this article. The English translation starts on page 13.

Policy Brief: Public Information Campaigns of the Government of Macedonia and State Institutions