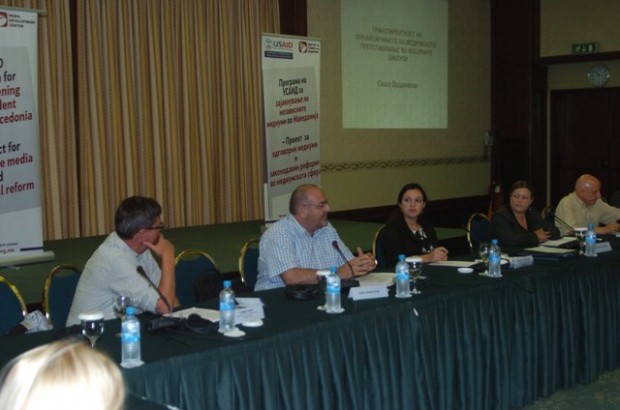 The Media Development Center organized the “Media in Electoral Legislation” debate on September 12, 2013, to discuss the announced changes in electoral legislation of the Republic of Macedonia, with special focus on the legal provisions covering media presentation and media coverage of elections.

The debate, organized under the auspices of the USAID Project for Media Legal Reform and Responsible Media, presented the policy paper “Media in Election Cycles and the Need for Changes of Electoral Code of the Republic of Macedonia“, prepared by MDC. Introductory presentations were given by the three panelists – Klime Babunski, Sašo Ordanoski and Erdem Ahmet, followed by an open discussion.

Klime Babunski from the Institution of Sociological, Political and Juridical Research, talked about the role of media in electoral processes, with special attention given to the role of Public Broadcasting Service.

Sašo Ordanoski talked about transparency of financing of media presentation in election cycles, while Erdem Ahmet from the Association of Journalists of Macedona presented the experiences from coverage of past elections from the point of view of practicing journalist.

The participants in the debate concluded that there was a need for some form or regulation of media coverage of the period from day of calling of elections to the official start of the election campaign. As noted by several participants, that is the most important period for the political parties and they focus all their efforts on that period, while the official campaign is used mostly „pro forma“, in the effort to present their platforms and programmes to the voters.

Anothe conclusion was that the allowed time for paid political advertising should be shortened from the current 15 to 12 minutes per clock hour, a limit also used by the EU’s Audiovisual Media Services Directive.

Ristanka Lalčevska from the Liberal Party promoted the idea to follow the example of some developed democracies, such as Great Britain and France, and fully eliminate the paid political advertising from the election processes. Lalčevska believes that it would lead to restoration of public debates between candidates and political parties, a practice seriously neglected by political parties in Macedonia for years.

Finally, the majority of the participants in the debate agreed that, although the changes in the electoral legislation are neccessary, true changes will be possible only if the competent regulatory and supervisory bodies start doing their job properly, monitoring and sanctioning those responsible for violations of proper electoral procedures and legislation.

About 50 representatives of the media, several political parties represented in the Parliament of Macedonia, representatives of international organisations and embassies, NGOs and members of the academic community participated in teh debate.

Attached to this article is the Summary of the discussions and proposal made in the debate „The Media in Electoral Legislation“.