Monitoring of Implementation of Media Legislation – Third Quarterly Report for 2015 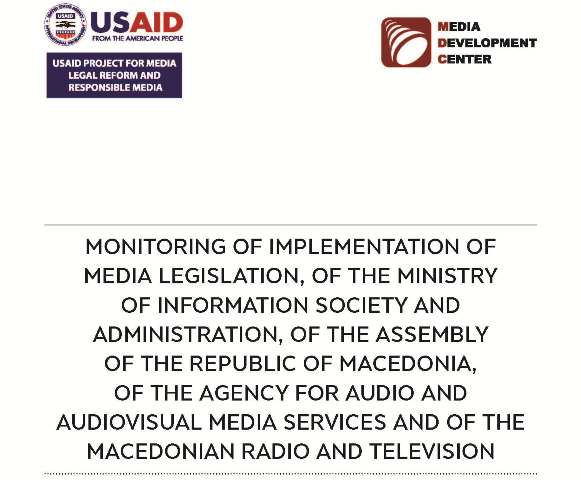 The implementation of the laws was analyzed primarily through the impact of the legal provisions on the competent institutions and the media. During this period, the monitoring of the work of AVMS and MRT focused closely on the process of appointment of some of their internal bodies, the manner of operations and the transparency and accountability in their work and operations.

The monitoring relied on the following tools: Presence in the sessions of the AVMS Council and the sessions of the Assembly of the Republic of Macedonia that discussed matters related to the implementation of the media legislation, analysis of documents published on the web-sites of the institutions, analysis of documents secured through freedom of access to information (FOI requests), and direct communication with the stakeholders.

This monitoring is implemented under the auspices of the USAID Programme for Strengthening of Independent Media in the Republic of Macedonia and the Project for Media Legal Reform and Responsible Media.

Monitoring of implementation of media legislation – Third Quarterly Report for 2015