The civil associations and organisations from Macedonia, demanded today, January 28, 2016, from EU Commissioner Johannes Hahn; the EU Delegation in Macedonia; the Members of the European Parliament; the Leader of the Senior Expert Group – Reinhard Priebe; the OSCE Spillover Mission in Skopje; Embassies of EU Member-States with offices in Macedonia; and the United States Embassy in Skopje, to remain consistent in insisting on implementation of true reforms for fair and free elections. The Open Letter, signed by 78 civil organisations and associations*, was publicly read in a press-conference held in front of the EU Delegation in Skopje. 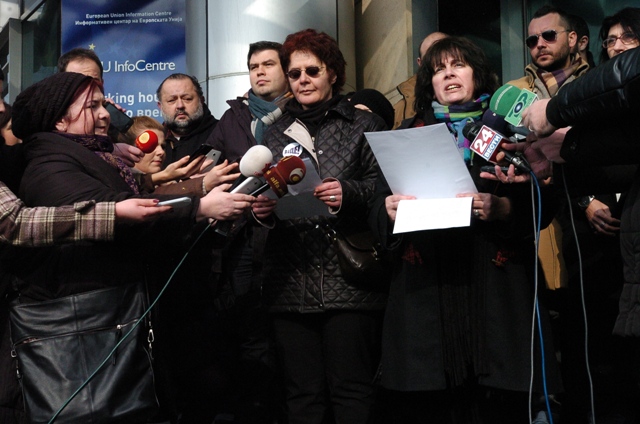 The Open Letter was read, in front of the EU Delegation in Skopje, by Biljana Bejkova from the NGO Infocentre and Irena Stefovska from the Initaitive AJDE!

”The insistence only on the date of the elections, without previous implementation of reforms for fair and free elections, could only lead to further deepening of the political crisis in Republic of Macedonia”, states the open letter of the Macedonian civil associations.

They note that, over the past seven months, they didn’t witness true reforms aimed to overcome and resolve the political crisis in the country. Instead, the organizations say, we have seen the continuation of undemocratic processes, disrespect for human rights and outright trampling of the Constitution.

“Instead of the rule of law and respect for the principle of separation of powers, we are witnessing political frivolous behaviour and desecration of legislative and judicial branches of government on the part of the executive branch of government”, say the civic associations in the open letter to the international representatives in Macedonia.

The civic associations demand from Hahn, the EU Delegation, the MEPs, the OSCE Mission and the ambassadors of EU member states and the US to adhere to the fundamental values of the European Union and to condemn the unilateral, arbitrary and unconstitutional adoption by the Assembly of the Republic of Macedonia of the decision to schedule the elections for April 24, 2016, in the absence of the majority of opposition MPs.

“We – the citizens and civil society activists – expect the European Union to continue to be our ally and partner in the fight for democratization of the Republic of Macedonia. On the contrary, we would have to regretfully conclude that EC remains to act as an accomplice in the demolition of democracy, human rights and the rule of law in Republic of Macedonia”, say the citizens and add that, if conditions for free, fair and democratic elections are not met, they will have no other choice but to call for a boycott of elections and continue with the protests against the ruling regime in Macedonia.

The Full text of the open letter is attached to this article.

Open Letter to the International Community 28012016

*The Media Development Centre is one of the organizations signatories of the Open Letter.